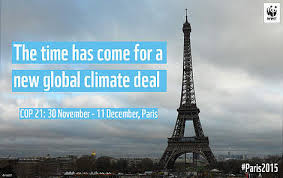 ‘Yes we can’ switch to 100 percent renewable energy
European Union environment ministers are discussing implementation of the Paris Agreement on Friday (04.03.) A timely transition out of fossil fuels is doable, says Alexander Ochs from Worldwatch. That is, if we act now.
Protest at Eiffel Tower at COP21 in Paris (Photo: REUTERS/Benoit Tessier)
Can we switch from fossil fuels to renewables in time to keep temperature rise to 2, ideally 1.5 degrees Celsius?
Not only can we do a transition to truly sustainable systems – financially, economically, socially and environmentally sustainable – we are in the midst of it. There is no one global trend in that direction, but there are many places, municipalities, provinces, whole countries, regions that are transitioning away from fossil fuels toward renewable ways of producing energy, and smarter ways of consuming energy. So it is absolutely doable.

Can you name some examples? Alexander Ochs (Photo: Irene Quaile)Ochs says renewables are fast outpacing fossil fuelsGermany has managed over the last two decades to transition away from fossil fuels. We have seen enormous growth rates of renewable electricity production. Or take Denmark, which has always been seen as a renewable energy champion. But it’s not a trend restricted any more to developed countries.Look at Costa Rica, look at many places on all continents – you find very dramatic examples, transitions away from fossil fuel energy toward sustainable energy sources – not always at the level of nations, but often sub-federal levels like communities or provinces. We have a lot of really great examples now, best practice examples. We really have to learn from experience and share that experience internationally.How do you see things developing in China, the world’s biggest emitter, with its huge population?The development is very ambivalent. On the one hand, you have a country with quickly growing emissions, a strong growth impetus – understandably. It is a developing country. On the other hand, you now have a five-year plan that invests a lot of state effort into efficiency, as well as supporting private industry efforts. You have investments into renewables in China that are outpacing investments in any other part of the world.
You had a US-China agreement on climate before the Paris Agreement, which really made the Paris Agreement possible. You have China chairing the next G20 summit, and really investing into the issue of reducing climate emissions and supporting sustainable energy. So there’s a lot of good news coming out of China as well.
And as in so many other countries, we are maybe in the midst of a revolution: a political revolution, technical, maybe a market revolution. So that means daily change – investment in one side or the other – and it remains to be seen how this is working out in the long run.
Buildings in Beijing seen through a thick layer of smog (Photo: Getty Images/K. Frayer)
Air quality crises have helped to push forward climate protection in China
What about the United States? It’s election year, and we’ve seen some setbacks in climate policy after the big push by the Obama administration.
When we talk about US, there is not one US player. Unlike many other countries where there is a consensus across parties, across people of different ideologies, that does not exist in the US. There, [climate] is a highly partisan issue. Candidates for presidency and US congress take positions almost exactly along party lines. Democrats are very much in favor of climate protection and more sustainable ways to produce energy, more efficient ways to use energy, support for poorer countries for climate adaptation, support for international cooperation. But you do not find that on the Republican side – with the exception of a few candidates who are not frontrunners.
So the results of the elections nationally, as well as their impact on international cooperation on climate and energy, will be very dramatic. Having said that, even under Republican leadership – which would have dramatic impacts – there will be many actors in the United States that will continue their action on the ground.
Whether it’s municipalities or cities, more than a thousand mayors are supporting the Kyoto goals – or on the state level, or individuals. So you do see a lot of things happening on the ground in the United States, so it’s unfair to these people if we reduce the US to only the presidency.
Windfarm in California in front of snowy mountains (Photo: REUTERS/Sam Mircovich)
The US state of California has opted for renewables like wind power in a big way
How optimistic are you that the Paris Agreement will be implemented and could really keep global warming to the target of 2 to 1.5 degrees within the timescale necessary to avert catastrophic climate change?
If I look at the results of Paris, it leaves me rather optimistic. But nothing is won yet. If you add up the national contributions of individual nations, you still get to a warming of about 2.7 degrees Celsius – if all the suggested changes are really implemented.
What happened in Paris is a framework for action. That was important, but the action still needs to happen: in every sector of our economies, and on every level of political decision making.
From every individual who makes lifestyle changes, up to new agreements of international cooperation between countries. On every level, we need to produce change, decrease emissions – and those actions have to happen now.
Alexander Ochs is Senior Director for Climate and Energy at the Worldwatch Institute, an environmental charity with branches all over the world.
The interview was conducted by Irene Quaile.
DW RECOMMENDS

Germany must speed up to reach climate targets 26.02.2016
To meet targets set at the climate summit in Paris, Germany must accelerate its switch to clean energy. A new study commissioned by Greenpeace says the country needs to opt for 100 percent renewable power by 2035.