Energy firm Cuadrilla, which suspended fracking in Lancashire after several tremors in August, is hoping to convince the Government the practice is safe. Cuadrilla has said it is working to address those concerns and hoped the prospective Bowland gas resource could be further appraised and developed. Both the Government and Cuadrilla continue to say natural gas will play an important role in providing energy for the UK for decades to come. This article is more than 11 months old

People will wonder why there is so much the government wants to conceal, says Greenpeace

The only page of the report not censored at all is the cover. Photograph: Cabinet Office

The  government has heavily redacted a secret report into the fracking industry after it was forced to comply with a court order for its release.

The Whitehall report on the UK shale gas sector emerged on Monday after a years-long battle to uncover the hidden documents – but with three quarters of its pages blacked out. The 48-page report, seen by the Guardian, includes 37 pages that are entirely blacked out and only one – the front cover – that was left uncensored. The remaining paragraphs outline plans to help frackers by countering the public’s rising public opposition to the industry with a government-led campaign to develop a “pro-shale narrative”.

The report, written in 2016, was finally released after an information tribunal ruled that it would be in the public interest to disclose its findings. Greenpeace has fought a long legal battle with the government over the suppression of the document.

Rebecca Newsom, Greenpeace UK’s head of politics, said: “Looking at this black wall of redacted pages, people will be wondering why there’s so little the government is willing to reveal about fracking and so much it wants to hide. “If ministers have really dropped their support for this polluting industry, why not publish this report in full and come clean about what’s been going on behind closed doors for years?” 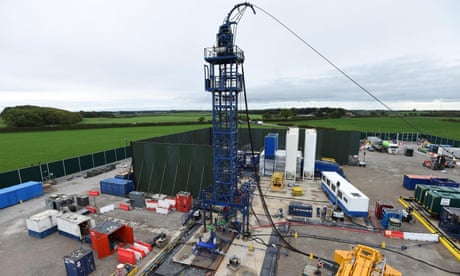 The report’s unredacted paragraphs said that the government was “already undertaking crucial work on communications to increase public acceptability of shale” and promised further government help to develop a “pro-shale national/regional narrative” and “shale champions”.

Greenpeace said the Conservative government should ban fracking permanently after it called an immediate halt to drilling in England this month. The government said it would not agree to any future fracking “until compelling new evidence is provided” that proves fracking could be safe, amid concerns over ground tremors caused by drilling.

“People would feel much more confident about the Conservatives’ pledge on fracking if they used the overwhelming evidence of its unacceptable risks to people and our environment to introduce a permanent ban, and put this industry to bed once and for all,” Newsom said.

Jon Trickett, the shadow minister for the Cabinet Office, said the Conservative party has “bent over backwards to serve the interests of big business, especially the oil and gas industry” while ignoring the voices of local people.

The report was released to Unearthed, the investigations arm of Greenpeace, after a lengthy battle between the campaigners and the Cabinet Office.

Greenpeace uncovered some of the report’s findings last year through a Freedom of Information (FoI) request but the campaigners were barred by Cabinet Office officials from obtaining the full report.

The FoI found that the shale gas industry was unlikely to achieve the exaggerated economic benefits promised by its proponents due to strong local opposition to fracking, with only 4% of the UK’s potential shale projects likely to go ahead in the face of strong opposition.

Ken Cronin of UK Onshore Oil and Gas said the case for UK shale gas development “is stronger than ever” because the UK is relying more heavily on gas from Qatar and Russia.

“This report plainly shows that there is still a lot of work left for us to do, which is what our members will be focusing on in the coming months,” he said.

The government’s own data revealed last month that public opposition to shale gas fracking has climbed to record highs while support for the shale industry has slumped to the lowest levels since records began six years ago.